Skip to content
You are here
Home > Buying > RV. Got it.

So we bought the RV. Its been a few weeks, but I’ve been busy with getting everything ready to leave. We’ve been selling a lot of stuff around the house and lowering our physical requirements and needs. We are aiming to live a simple life, and reducing our footprint is part of that. With that in mind, I’ve been trying to get our computer and tech needs streamlined, so that has been taking up most of my time outside of work.

For the RV, we need to take it in for an oil change and get a tune up. It runs pretty well and I drove it about 30 miles form the purchase site to the storage site, but it could still use a little cleaning and tune up in the engine area. The oil change is needed though, I’m not sure how long it has been since it last had an oil change, so I’ll get that done right away. Then we need tires replaced. I know that will be expensive, but I’m prepared for that.

Next up is doing some interior work, but that might have to wait until we go to Florida. We will also be painting the interior and hopefully the exterior if we can afford it, but those can also wait until we get to Florida. We will be staying for a week or two at a campground there, so we will have electricity to do everything we need for a little bit.

Projects though, are thus:

Thats about it for now. Here are some photos of the RV, the front, the side, and the cab. Tomorrow we will go out and do a full video intro of it and then use that to up my Premiere skills, and upload that to YouTube. Then we will make weekly videos for now since we have weekends off, but once we get on the road, we will do videos every two or three days. We plan to travel a lot and will show videos of places we are at, things we are doing, and weird little spots on the side of the road. Fun times ahead! 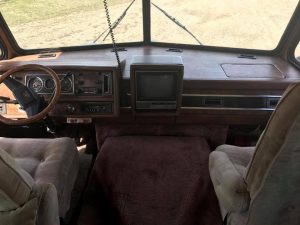 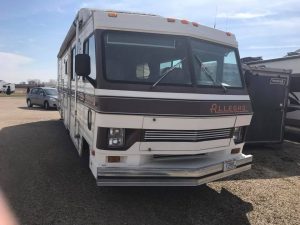 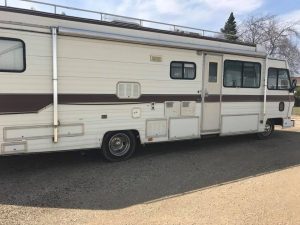