It should be obvious that we are stuck in Kentucky waiting for a nice day out to get towed to the transmission shop to get our transmission installed. We had one window, but weren’t able to make it since we didn’t want to be stuck there overnight and have to deal with freezing rain the next day. It then snowed on top of the ice, so I’m glad we didn’t risk it. Now its 13 degrees out, but we have an electric heater, and electric mattress pad, and an electric blanket so we are in no risk of freezing. Where we go from here though, depends on too many factors to count.

We have a Thousand Trails membership, so we’ve been using that to stay where we are for now. The manager has been very helpful in letting us stay, though we do have to pay for every third week. Its been a pain, but its tolerable. When we get out of here, which at this point, I have no idea when that might be, we’ll finally head south to Florida. It was originally our plan to get there for Thanksgiving, but that didn’t happen. Then it was Christmas, again failed. Now its “whenever the hell we get there.” We have a place to stay when we do get moving, so hopefully we can stay there for a couple of weeks and then move on, only to come back later.

Looking at the weather forecast, its possible we could get out of here a week from Monday. That’s when our current reservation ends, and it is supposed to be almost 50 outside. If the weather changes slightly to the warmer end, that would be a good day to leave. I don’t plan on weather cooperating though, so we may have to pay for yet another week to be stuck here. I hope that isn’t the case, but I want to be prepared if it does.

We have a lot of work to do inside as well. We bought a small portable clothes washer and used it for the first time yesterday. It doesn’t have a dryer, but does have a spinning basket that forces most of the water out. We used it yesterday to do some laundry, and it works great. We’ll be doing a review of it after we’ve used it a few times to make sure it stands up to the stress of doing multiple loads of laundry. So now we have a bunch of laundry hanging in the RV drying out. It should be mostly dry by now as it was hanging all night, though it did get a bit cold inside. Still, its a piece of equipment we really needed since the laundry room has been closed at this campground since the beginning of December.

When we do finally get out of here, we’ll head south and then north up the coast. We would like to use our tax refund to buy into the Elite package through Thousand Trails, which would allow us to stay for three weeks at a time without having to take a week off between campgrounds. We just have to drive to another campground. We also have access then to the full country instead of just the few states we have now. With that in place, we will be heading north and stopping at my sister’s place in North Carolina. We found a place we can stay there for a week or so, and while its not on her property, its close enough for us. 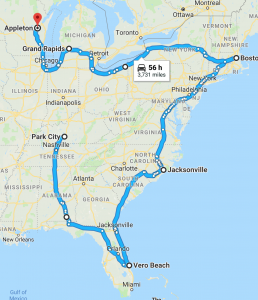 After that, we have plans to be near Boston to stay with a friend and maybe do some work on the interior if we can afford the materials to do it. I would love to take that time to build a desk where the old dinette was, as well as rebuild the bedroom storage area so we make better use of the currently empty space in there. There are some smaller things we can do in between though, like adding peel and stick tile to the backsplash in the kitchen and all the walls in the bathroom. That’s something we can do ourselves though, and we don’t need a lot of space to make it happen.

Beyond that, we’ll stop near the border of Ohio and Pennsylvania to visit some other friends, then to Michigan to see a friend I haven’t hung out with since I was in high school, and finally back to Wisconsin for a little while. By then it should be getting close to winter and we can head south again.

I know I say this all in advance assuming it will happen, but really, nothing is set in stone. We are travelers and wanderers and making the best of it as we can. Things don’t always go as planned though, but we are trying our best to make things work.