As I discussed in an early post, we have a lot of technology to power. Those devices and electrical demands are all for ways to make money, entertain ourselves, and communicate with the outside world. The topic of this entry though is going to be all about food preparation. How to store food, how to make food, how to cook food, and how to clean up afterwards.

As our main goal is long term sustainability, we need as much cooking down without electricity as possible. That means not filling a freezer with frozen TV dinners to thaw (though it’s been a very long time since I had one of those anyway). It also means buying as much in bulk as possible and keeping things cool and dry.

I’ve already started with beans and pasta. We do not eat a lot of pasta, but we do make a variety of meals with beans in them. I bought several two quart containers from Walmart a few months ago and have been keeping them filled with different types of beans, depending on what we want to eat that day. Dry beans has the benefit of less weight (important in an RV), less sodium (no canned liquids), and less cost (1 lb. of beans usually costs almost as much as one can of the same type.

I also ordered some desiccant packs to throw in the canisters, so that should help keep everything dry as well. We have not had an issue with moisture in any of the canisters though, but better safe than sorry, especially since it does not cost that much. I can throw one in a jar of dry pasta or beans, and it should keep for a long time. 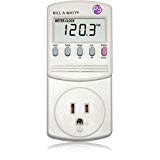 We also recently purchased a small freezer. It is about 5 cubic feet inside and doesn’t take up much room, but I’m not sure how much electricity it uses. When I get a Kill A Watt meter, I’ll be able to check things like that and get an idea of how much power use on each item.

I’ve also looked into small refrigerators, preferably one that runs on propane so we do not have to worry about running the solar capacity to its limit. Those are significantly more expensive though, so it may need to be AC powered off an inverter. Since I already have a 2000 watt inverter that I have not installed yet, I could even use that for just the kitchen items. If we have a small fridge and the freezer right by it, then we can reduce a lot of wiring and have just those two things running off one inverter, one set of batteries, and one set of panels. The added bonus is that we can set that up now and just move it over to the final structure. If we can get it work completely off grid in the RV, then moving it to a house is a one day project.

Because pretty much all food lasts longer in a dark, dry space, then we will have to add a pantry to the building layout. I imagine a large closet with shelves on three walls and a door. Nothing else in there. It’s possible we could have storage for kitchen appliances in there or at least the items we do not use every day. We might be able to put the power system for the fridge and freezer in there as well, but we may not need to.

Of course, eventually we should be able to grow and store almost all of our food. That means we will need somewhere for canning supplies, a dehydrator, and someway to smoke meat for longer storage. I am not sure about a dehydrator, but I’m pretty sure if can be done completely unplugged. A smoker should be similar also. For canning supplies, we really just need a way to boil water. All of that combined means we can grow, harvest, store, and eventually eat our own food.

A lot of items we eat have some prep work to be done before cooking, but we’ve gotten very good at throwing the right things in the crock pot to get a good, hearty meal. We have not used a blender in a long time, though we do have a small one. We don’t really have a need for much else. We’ve not used a food processor, hand mixer, or any mixer actually in a long time either. Our food prep pretty much consists of washing, rinsing, and cutting things up.

To cook food, we need heat. There are two ways to get that heat in our situation: Off grid electricity, or fill up propane bottles frequently. We can go either way or both even if we need to, depending on what we need to do. Because I will be likely be having the cold storage on its own system, having the rest of the house on one battery bank should be fine. I may even go overboard and have the electrical system and smart home devices on their own system as well, leaving us with Cold Storage, Data Center, and Other Parts as our electrical systems. It overcomplicates things, but I’m fine with that.

Back to cooking then, we have the option of getting a propane stovetop, similar (or even identical) to one in an RV. We would just have to put in place and connect the propane and be done with it.

Ovens are a different matter though. RV ovens are usually pretty small and nearly useless. If we get a propane stove, it would be tied into the same lines as the stove and hopefully we can monitor it to know when we are getting low. While we will be remote and off grid, I still hope we can either have regular propane deliveries or else be able to take as many tanks as possible to get refilled at once.

For the oven, I’d prefer one that had a propane heating element with an electric convection function to keep air moving around inside. I honestly do not know if that exists though. If we can get a unit that can be built in at waste level, that would be perfect so we do not have to bend over to take stuff out. Not a huge problem, but the easier things are and planned out, the better off we will be in the long term.

Other than that, we just need electricity for a microwave that will occasionally be used. We do not need a large one with lots of features and I hope to use it as little as possible, but it would still be nice to quickly heat things up at times. It also greatly depends on how many watts one uses and tied into the greater electrical system.

We also have a crock pot we use often but I don’t think that uses many amps. And of course there is the coffee maker, which we will never be able to get rid of. 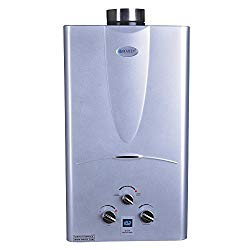 Of course, everything that gets dirty also has to be cleaned eventually. In part of our effort to reduce waste, I’ve started transitioning us over to cloth rags that can be washed and reused instead of buying paper towels every month and throwing them away. I bought some of the mechanic’s shop style rags which work for places that aren’t food-related, but have ordered some bar mop rags as well for kitchen stuff.

We also need hot water, so I have get a water heater for the kitchen. I found the MAREY Gas 10L Digital Panel Tankless Water Heater which should well for us. It runs on propane and 2 D-cell batteries, so we can put that in without worrying about the electric going out. With the Marey heater, we should have enough hot water for washing dishes, but might not be enough for a shower as well. If it does turn out to not be enough hot water for showers, then we will have to rethink things a bit.

If we can manage to grow our own food as much as possible, there will be very little packaging waste. If we grow a vegetable and can it for later use, we can reuse the jar for a new item when it’s empty. There may be some things we do need to have to buy, namely coffee and some products we simply cannot grow in our area, but for the most part, any waste will hopefully be something we can compost and put back into the soil.

Meat products, of course, should not be put in a compost bin and we cannot throw it outside as it will attract scavengers. If done correctly though, there will hopefully be very little waste from animals anyway.

All this means we need an electrical system just for the fridge and freezer, a hot water heater, and a couple of outlets connected to the main system. If we can put the electrical cold storage system in the pantry, then we can have an area set apart and it will be cold, dry and dark. That is ideal for food storage.

Stove and oven can be propane fueled, but the lines kept away from where the batteries are store, just in case there is a leak or spark.

For coffee, we may have to go back to a traditional coffee maker or even one that can be used over propane. It may take a little longer, but will use far less electricity and save us money on coffee as well.

In the next post, I’ll be discussing more of Smart Home functions and how it will tie together with everything else.