I received a Power Watchdog 50 Amp Smart Bluetooth Surge Protector with Auto Shutoff from Hughes Autoformers for review. It is easy to setup, easy to use, and so far has done its job.

The Power Watchdog 50 Amp Smart Bluetooth Surge Protector with Auto Shutoff has high or low voltage protection, open ground protection, open neutral protection, replaceable surge protection, and an app. Basically, if there is an issue with power at a campground, it can detect it and stop it from damaging your RV. Its a cheap investment to prevent expensive repairs to the electrical system or electronics in your RV.

Hughes Autoformer has been in business since 1995, making products to improve low voltage and protect RVs, as well as other electronics. They make the Watchdog line, which has surge protectors, both plug in and internal installed models, and the EPO models that have the shutoff feature when problems arise. The also make a low voltage booster that plugs in and can improve the low voltage instead of just shutting off power, but I have not had the opportunity to try that yet. The boosters are more expensive, but for most RVers, the Watchdog EPO should be enough.

When you buy the Watchdog from Amazon, it comes in a large box, larger than I expected and heavier as well. Compared to most other RV surge protectors, it seems a little larger, but not much more. It is heavy, but I’m fairly certain it is because of a lot of electronics inside. We received a 50 amp model, though it is also available in 30 amp if that is what your RV uses. 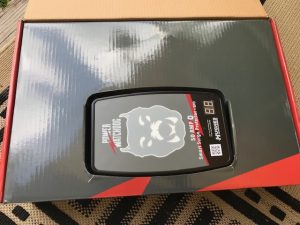 Inside the box is the Watchdog itself, a voltmeter to plug into outlets and test your power inside, some instructions, and that’s it. It is well secured in the box so nothing shifts in shipping. The box is pretty large, but the cables on the Watchdog do not bend much (they have to be a heavy gauge to handle the power), so it can’t really be made smaller. 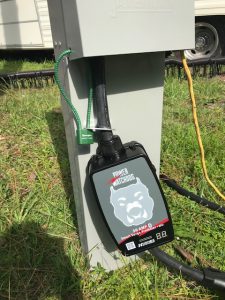 The main benefit of the Watchdog over other surge protectors is the addition of Bluetooth. There is an app made by Hughes Autoformer for both iOS and Android. I downloaded the app and connected to the Watchdog and it displays the current power settings of the Watchdog.

One thing to note is to download the correct app! There are two versions of the app in the Apple Appstore (and probably Google Play Store as well). One works, the other does not. For the Surge Protector + EPO, you need the app with the black icon. I’m not sure if the white icon’d app is an old version or for a different model, but it would not connect to our Watchdog.

Once I correctly downloaded the right app, I just selected the “add device” option, held the camera over the QR code on the Watchdog, and it connected right away. Pretty simple actually.

The app does not display a lot of information, but it displays enough. One thing I discovered was while we have 50 amp service and power, we are only using 30 amps of it. Our second leg of 30 amps is not being used at all. I learned through research that apparently our RV had two air conditioners at one time, or at least was wired for a second one, but it has not been used since we moved in. Without the app telling me we are using no power, I would never have known that. 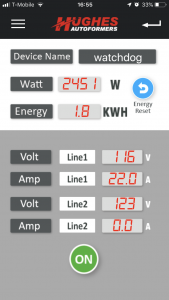 As you can see, the app displays total watts since it was reset, current volts and amps on both legs. I wish it had some memory and could display a graph to see if our power was constant, but that isn’t a feature yet. I’ve been told it may be added in future models though.

Do note though that the app connects to the Watchdog through Bluetooth, which is good for about 30 feet. You cannot monitor it from anywhere you have internet access, only when you are near the Watchdog. There are ways to connect to it in other ways that I am looking into and will review in the future, but for now, the app is good while you are at the campsite and only then.

Short answer: Yes it does!

Long answer: We installed the Watchdog on Tuesday. Since then, it has stopped power problems three times. At our current campground, we have frequent problems of power dropping when it storms. And being in Florida, it storms a lot. When the power would fluctuate, our alternating current devices would wobble and restart. That is bad for electronics, and I did lose one computer because of it.
With the Watchdog, the power did cut out. I went outside to see the face of the dog was red, so it was doing its job. After a few minutes, power kicked back on. I didn’t have to do anything. It does have a timer so it will turn back on after 90 seconds (I think, maybe 60 seconds) of good power levels so it won’t restart and shut down as the power bounces around in total volts. It simply waits for it to stabilize, then waits a little longer to make sure it is staying stable, and then turns everything back on.

For under $300, the Watchdog EPO is a beneficial addition to an RV. You can monitor your power levels to see what appliances are causing the big draw that may trip your breaker and protect you from power problems or bad wiring at the pole. There are other surge protectors and electronic monitoring systems out there, but the Watchdog has the app that allows you to watch what is going on anytime you are within range. I wish it had a memory to be able to monitor the voltage changes, so if that is added in the future, it would be a great addition.

To buy a Power Watchdog 50 Amp Smart Bluetooth Surge Protector with Auto Shutoff, please use our Amazon link to support us and Hughes Autoformer!