I broke the Rayzar. Well, sort of.

Actually, I broke the control panel. This is an update about the Rayzar and what not to do.

On the back of the control panel, there are three female coax ports, Ant-IN, Cable-IN, TV-OUT. Those female terminals are on very small wires that receive mostly data, though the antenna in port must also send data to the antenna itself. Because of this, they are impossible for the end user to repair or replace.

Each cable has a small copper wire inside and a shielding on the outside. The wires and terminals are soldered together, so if you happen to damage one, the whole unit must be replaced unless you really know your electronics and can solder tiny parts. I do not.

I broke the Ant-IN terminal by twisting it a little to remove the coax cable coming from the Rayzar on the roof to the control panel. I didn’t even realize I was turning it until it came off in my hand. It is perhaps a little too delicate and does not turn at all.

Fortunately, I was able to temporarily connect the antenna in cable to the cable in female and still get over the air TV. Unfortunately, the control panel now displays an E2 error because it doesn’t see an antenna connected, and until I replace the control panel, I won’t be able to control the Rayzar and get it to turn. We haven’t moved in awhile and aren’t anytime soon, so it isn’t a big deal. 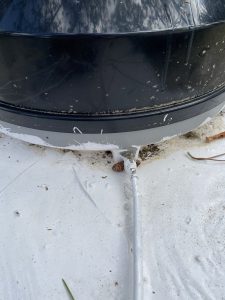 I was able to contact Winegard support and get a replacement sent to me. Every time I’ve contacted Winegard, they’ve been helpful. The person responding did ask for the serial number, but since our Rayzar is now glued in place with Henry’s sealant, I can’t get it up to see the serial number underneath. I wish I had taken a photo of it before I made it permanent, but they were still able to process it without.

To replace the control panel, it is as simple as removing the two screws holding it in place, disconnecting the coax cables, then disconnecting the power and reconnecting it all in reverse. When you disconnect the power DO NOT LET THEM TOUCH EACH OTHER. It will cause a short that will blow a fuse. And as always, if you are uncomfortable with electricity, have a professional do this for you.

In summary, if you are ever in need of warranty work from Winegard, contact them. I’ve never had a bad conversation with anyone at Winegard. I’ve also not needed to contact them more than a couple of times because everything seems to work as it is supposed to and I haven’t had any issues.

Purchase a Winegard Rayzar Automatic Antenna at Amazon.com and help support Bubba on the Road.