We recently upgraded from a SureCall Fusion2Go 2.0 RV to the SureCall Fusion2Go 3.0 RV to see the difference and how much of an improvement was made with the new version of the device. We tested it out in a couple of different campgrounds where we have been before to tell if it made much of a difference, and if so, how much.

First of all, the upgrade from the 2.0 to 3.0 is easy. The only things that changed are the booster box itself and the power supply. I don’t know if the power demands are any different, but the power supply on the 3.0 is a simple large AC plug instead of having a brick on the cord like the old model.

The only other physical difference I noticed is that the heatsinks on the new model are a little larger than the old model. Aside from reading the information on the back to tell which one is which, the slightly larger heatsinks are the only difference. Since the 2.0 got very hot at times, the ability to remove more heat from it is a good sign.

Because the antennas and cables are all the same, I was able to simply remove the old cell booster, unhook the wires to the roof mounted and internal antennas, and plug them into the upgrade. We didn’t have to make any new holes in the roof, didn’t have to climb up there to take off the old antenna and put up the new one, and literally all we had to do was unscrew both antennas, remove the screws I had used to mount it to wall, unplug the power cord, and then do all that in reverse. The box is the same size and the mounting holes line up so I didn’t even have to make new holes in the wall. Replacing the 2.0 with the 3.0 took all of five minutes.

Once the antennas were connected and I had mounted it back onto the wall, I plugged in the power cord and waited for it to boot up. It doesn’t take long at all, under a minute and starts working. The great thing about the SureCall Fusion2Go 3.0 RV is that there is no setup, nothing to change, nothing to do other than literally turn it on. If you are full time travelers like us, this is great as all we have to do is turn it on when we get to a new destination and it starts working.

The SureCall Fusion2Go 3.0 RV does come with a cigarette lighter-style power adapter for running off of DC power from the batteries in your RV. Where ours is currently located though, the DC power line doesn’t work so we have it plugged into AC power. When we run new DC power lines, we will be powering it off of a DC adapter though so it will work even when we are not plugged into shore power. I’m not sure the range of the booster’s internal antenna, but they say it should cover the whole RV. If it does, then we’ll be able to benefit from it even while driving with our smartphones.

Now then, the actual benefits! At the campground we were at when we first installed the 2.0, our hotspot had an atrocious connection to the internet. It would work just barely, but usually not all. We had frequent dropped calls and could certainly not stream any video. When we added the 2.0, it got much better, but still not perfect.

With the 3.0, it honestly was not much better. That campground was in a valley and pretty far from the closest tower, so pretty much no one had any cell data signal. We talked to our neighbors and found out Verizon had an okay signal, but AT&T and T-Mobile (which we have), barely worked or not at all. Even with the booster, it got better, but still not great. There is an improvement, but not a huge amount.

We then moved to a different campground about 200 miles away and were able to get a campsite about 20 yards away from the one we were at last time we were here. This is where the SureCall Fusion2Go 3.0 RV shines. While we were here last time, our dBm was around -85, which still isn’t great, but good enough. This time with the 3.0, we are getting as high as -71dBm, which is a significant jump. When we test actual download speeds when connected directly to the modem, I’ve gotten as high as 21Mbps. That’s certainly not speeds people in traditional homes would like, but for us on the road, it is stellar. 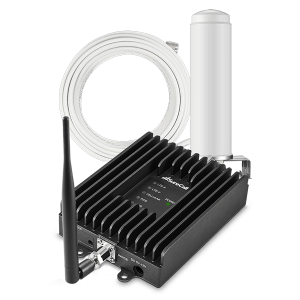 I have found one thing that I wish could be improved: When there is a terrible signal, it doesn’t boost much. After doing a lot of research on different cell boosters, this seems to be a flaw in all of them so I think it has something to do with the towers and signal and not the booster itself. If you have a horrible signal, like -110, its not going to do much. It will boost it to make it useable for getting email and making calls, but it won’t allow streaming. When our unboosted signal was at -110, boosted only got to about -95. Its still a decent improvement, but leaves something to be desired.

However, if the signal is better coming it, it will be MUCH better after being boosted. I haven’t figured out the threshold yet of where the improvement starts to get really good, but it seems to be somewhere around the -90 mark. Worse than that and it will do a little better, but on the positive side, it will make an okay signal into a good to very good signal.

Should You Buy It?

If you are frequently in areas where you absolutely need data, then yes, the SureCall Fusion2Go 3.0 RV should boost the signal if there is one already present. If you are just checking email and browsing the web, then you should see some improvement from a bad signal. If you are boondocking out in the middle of nowhere though, don’t expect to stream Netflix or anything like that. It can improve it some, but might not be enough.

However, if you are frequently in areas that already have an okay signal but need it to be better, then yes, the SureCall Fusion2Go 3.0 RV can improve that. We have several computers, a Roku, two iPhones and tablets with several of them accessing the internet through our hotspot at one time and have found improvement when the signal is already okay. It certainly helps if there is already a signal there to boost.

But you already have a Fusion2Go 2.0 RV?

If you already have the 2.0, I’m not sure its worth upgrading to the 3.0 honestly. It did give us improved speeds in a place where the signal was already okay, but the problem with not being able to boost a bad signal much still leaves some room for improvement. Also, since the booster is the only thing that changed, if you already have a 2.0, you don’t need to get the 3.0 RV model, you can just get the SureCall Fusion2Go 3.0 that doesn’t come with the extra large antennas and use the ones from the old one. It’ll save you about $50 since you don’t need to buy equipment you already have and that hasn’t changed since the last model.

Do I recommend it?

Again, if you have a no cell booster at all, then yes, the SureCall Fusion2Go 3.0 RV can help in areas with poor signal. Its not perfect and it won’t get you sudden huge increases in signal, but it has made it better in our setting and made things useable when they previously were not.

One thought on “SureCall Fusion2Go 3.0 Review”