Skip to content
You are here
Home > Repairs > Fixing the Brakes

When we were in Michigan way back in September, while driving around, the brake light came on and the brakes required more force to work. It wasn’t too bad, but I filled up the master cylinder, and it worked great for the next several months. Fast forward to last week, and it was an issue again. When the mechanic took the RV out for a test drive, he said he had to push the brake pedal to the floor and downshift to get it to stop. I filled up the master cylinder again and it was working fine. I was sure what the problem was, but knew we’d soon be fixing the brakes.

The next two days went without incident. Then on Friday, it was low again. I filled it up and drove the rest of the way to our destination, but new the brakes needed work. It was working fine, but obviously there was something wrong. When we got to our destination, I had my brother come over to where we were parked and we worked on them. By we, I mostly mean he did. I was under the engine helping him, but without him knowing what the hell he was doing, I’d be paying someone a lot of money to fix it.

When I pressed on the brake pedal and my brother was watching underneath for a leak, he could see the fluid coming out of the master cylinder, so it was obvious that was where the problem was. We needed a new one and fortunately there was an auto parts store in town that had one in stock. We went there, told them all the info of Sleipnir, gave them the old master cylinder and went on our way. Seemed to be working fine. We went to put it in, which was a pain in the ass, and everything seemed fine. Got it mounted and tried to connect the brake lines and that’s where we hit an issue.

The brake lines would not fit into the valve holes. It was close, but not quite as they were just barely too big. It was getting dark, so we stopped for the night and decided to do it the next morning.

My brother came to pick me up at 10am on Sunday to go get the replacement part. We went to the same store, told them what was going on, and the new clerk looked it up. We had told the first guy everything, but he had gotten us a different part, not the RV specific part. They didn’t have the right one in stock though, so we had to drive 20 miles away to get the right one. Went through the same thing as well as getting some extra parts to make the connection work, and finally, almost three hours later were headed back. 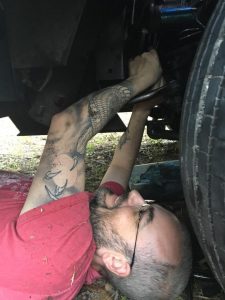 My brother had prior engagements, so he dropped me off and went to go do that. While we Tiffany and I were in the RV, I had a thought to check the brakes in the back. We had assumed they were drum brakes, but I wasn’t sure since the master cylinder was slightly different than the original. I went outside, looked under the RV, and sure enough found out they were disk brakes, not drum brakes. I sent the photo to my brother, looked it up online, and found out that the local store has the part we need, but they were closed already.

Normally, this would be okay. I could get the part Monday morning, make sure everything lines up right and then wait for my brother to finish work so he can come help with the final tightening and bleeding of the brakes. However, because of the return and everything, all of my money is tied up in the bank system. I’ll have money, just probably not tomorrow. I asked my father-in-law if he could swing by the store on his way to us and pick it up, even found a 25% off coupon code, so I’m hoping he can grab it, come to us, I can make sure the brake lines fit, and then we can go do our stuff and be good to go at the end of the day.

So yeah, the brakes are a pain in the ass. We are so close, but still need to do a little work. They’ll work fine when this is done, but its annoying that I thought I knew what we had when I did not. Hopefully its all taken care of tomorrow and we can rest for a day and be on the road on Friday to a campground.