Our RV is an older, vintage model, and did not come with an oven. As such, for the first few months of our travels, we had no way to bake anything, much to our dismay. That changed when my dad brought us a spare Nuwave oven he had, allowing us to bake things like french fries and even pizza. While not ideal, it does the job and works for us.

First off, the Nuwave oven is large, very large. A bit cumbersome in fact. While this makes it good for cooking large items, it also means you have to find somewhere to put it when not in use. It doesn’t break down easily either as the dome itself is one large piece, but it fortunately comes with a storage bag so you can put it in there and throw it in a closet. I suppose you could even throw it in a basement unit underneath if you wanted, but that makes it more awkward to use frequently.

Second, well part of the first, in our situation, its difficult to use when you have to take the top off and flip things or get the food off. We have a low clearance on our countertop since under the microwave is pretty much the only space we have room to put it. When we take the top off to get inside, we have to pull the whole unit out from underneath the stovetop hood, lift the top off and figure out somewhere to put it, do the flipping and replace the top. Its not horrible, but it isn’t very convenient.

That said, it does work well. The Nuwave oven can bake just about anything that can be flipped over, they even have an attachment to make flipping a pizza easier. We have made pizza on it a couple of times and it turn out fully cooked and crispy, so it does work. It also cooks fries perfectly and we’ve even made chili fries on it.

The Nuwave oven does use a combination of infrared heat and convection with a fan in the top unit blowing the hot air down and cycling it. Because the heating element is in the top, everything has to be flipped over midway through. It gets very hot as well, but there is no way to change the temperature inside, just the length of time. We found that directions on packages often have to be altered slightly, usually by cooking for a few minutes longer.

Is the Nuwave oven worth it?

Well, that depends on what you already have. If you have a convection/microwave oven, then probably not. If you are cooking for a lot of people, then probably not. However, if you are only feeding one or two adults, then yes, its worth it. Take into account the size for both storage and actually using it though. The results are solid though. Fries came out crispy, pizza was good. Vegetables are easy to cook in it as well. 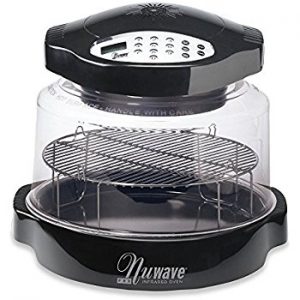 I would prefer a device that we don’t have to unpack and repack every time we use it though. Something a bit easier to use would be nice as well. For the cost though, its a welcome addition.