Its inevitable, bugs get inside RVs. It can’t really be avoided, whether ants, flying bugs, or disgusting crawling things like roaches. This is about the flying ones though. This is about something simple and cheap: a bug zapper.

We bought this little bug zapper from Amazon. I wasn’t sure it would work, we never used them at home as a kid. We had to find a place to suspend it and it ended up temporarily being above the cat’s litter box. We’ve driven with it and its never fallen off, though I’d ideally like to hang it somewhere closer to the door to catch bugs when they first break in.

Its a simple thing, just a little bug zapper. The first time it worked, I thought we had shorted something out in the RV, not even remembering that we had put that up. It dawned on me and I smiled, it was doing its job.

Its not a big expense, less than $30, but it is well worth it. We have had some flies inside, but since we set the bug zapper up, the fly count has gone way down.

Its not as large as I was expecting either, about 12 inches from top to bottom, and on the bottom there is a piece that unscrews so you can empty it when you want. Doesn’t even require disconnecting from power to empty the catch, just unscrew, throw them away (or outside), and put it back on. 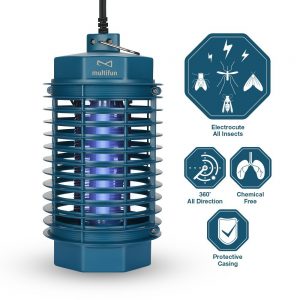 While there are more expensive ones and bigger ones, this one seems to be fine for our 33 foot RV. Well worth the cost to get rid of flying bugs.

Coming up: Getting rid of ants. We keep getting the small black ones and are trying to figure out a way to deal with them other than just squishing them all the time.