I had the opportunity to try out some OvaEasy Egg crystals for an alternative to carrying around fresh eggs in our RV. Since fridge space is at a minimum, being able to use something that stored dry and lasted longer was a good idea. Here’s how it worked out.

First off, in our RV, we have no oven and we have only used our stovetop a couple of times. Almost all of our cooking is done in the microwave, over a campfire, or in a crock pot. As with most RVs, we have a small fridge that is more designed for weekend camping than long term living. So for us, to have an egg product that doesn’t take up that valuable fridge space, lasts longer, and still cooks like fresh eggs would be a great addition. 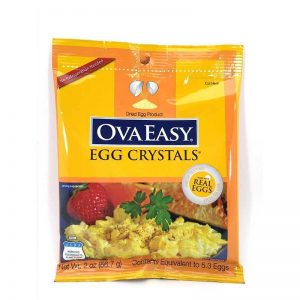 When we do cook eggs, it is usually scrambled eggs in the microwave with some meat and cheese added. Since it is just the two of us, we usually do this with six eggs combined for a total three eggs each. I normally cook the meat, then scrambled the eggs and cook them in a bowl, then when they are done I mix it all together with some cheese and essentially have a scrambled omelet. Its easy, it tastes the same, and it only takes a few minutes and with less dirty dishes.

Using the 2oz OvaEasy Egg Crystals, the package says it is five eggs. Simply add the listed amount of water, stir it together, and you have the same consistency of scrambled eggs. It is a little thicker than eggs, so next time I may have to add a little more water or add milk and sour cream like I normally do when making a scrambled egg omelet.

Then I just cook the eggs in the microwave, keeping an eye on it to see when it is fully cooked and not runny anymore. I use a fork to break it up into smaller pieces, mix in the meat and cheese, stir it some more and its done.

The end result tastes just like fresh eggs. I couldn’t tell a difference a in flavor at all. It is a tiny bit more chewy though, but I’m not sure if it simply needed more water to thin out the mix before cooking or if that is a natural consistency for using egg crystals. It was not so chewy as to be unpleasant though, just slightly more so.

All in all, we were happy with using the OvaEasy Egg Crystals for making scrambled eggs. The packages are small envelopes that can be stored in the pantry instead of the fridge and take up less space there than the equivalent amount of eggs would take up in the fridge. And since they can be stored anywhere, we don’t have to worry about them going bad or using precious fridge space. 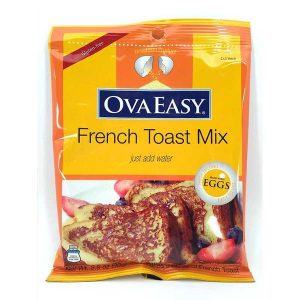 Next we used the OvaEasy French Toast Mix. Again, since we never use the stovetop, we opted for a crock pot recipe. I found one online, but simply used the timing for it, not any of the ingredients.

Since one package of french toast mix can be used to make up to eight pieces of French toast, I took 8 pieces of bread and cut it up into cubes. I mixed together the OvaEasy French Toast Mix with the required amount of water. I put half of the bread cubes in the crock pot and poured half of the mixture over it. Then I put in the rest of the bread and poured the remainder of the mixture over it. I set it to cook on high for two hours and left it alone.

When the time came, the top of the French toast was crispy, the inside was soft, but not too soft. We scooped some out and put butter and syrup over it and enjoyed it. It cooked well, tasted like French toast and had a subtle cinnamon flavor. It was simple to cook and made it exactly as expected.

My only gripe with the OvaEasy French Toast Mix is that its not very sweet. This may be a result of the recipe of French toast I grew up with, but next time we make it, we’ll add a little sugar or vanilla extract. It does taste and cook just like freshly made French toast though, so your preferences may vary.

If you live in your RV and frequently eat eggs, the OvaEasy Egg Crystals will save you space and reduce trips to the store to get fresh eggs. Since they can be bought in bulk and put away in storage for up to 30 months, keeping some on hand is easy and worry free. The end result is the same as fresh eggs, and with a little adjustment depending on your situation and appliances, it should be easy to make the recipes exactly as you prefer.

We will also be testing them out in a baking recipe soon. We have a solar oven we are trying to find time to test out, so when we get to that, we will be using the OvaEasy Egg Crystals in that and analyzing the results.